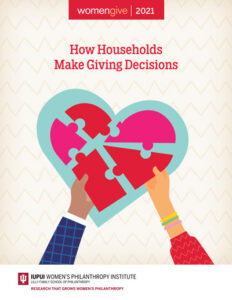 When it comes to making charitable giving decisions, it turns out that most U.S. couples work together. But the number of such joint decision makers is on the decline. According to a study from the Lilly Family School of Philanthropy at Indiana University, about 62% of couples consult with each other. That’s down from 73% in 2005, the last time this behavior was examined for the general population, rather than simply in wealthy families.

When one person in a household makes the giving decision, it’s usually a woman. When a man decides without consultation, though, the amount donated is much larger than when a woman makes a solo decision. Generally, the study found that while households make their giving decisions differently, about 75% of couples agree on giving amounts and recipients.

Read more about the findings